The year was 2630 B.C. and while it would make sense for our story, the B.C. does NOT stand for before computers.  We would have to wait a few thousand more years before that modern miracle to arrive.  The place was Saqqara, Egypt. The ruler on the throne was King Djoser.  Back in those days, when a King took the throne, the building of his tomb was to begin almost immediately. Talk about working yourself to death! Therefore, unlike our expedited turnaround times today, our ancient construction ancestors would take 20 – 3o years to construct a building.  This was 20 – 30 years with no safety plan, no technological help, no customer management software, and no modern construction luxury’s.  So, how did they do it!?  How did they build such a massive structure that withstood the sands of time?

Let’s start with our architect – Imhotep.  Imhotep was not a studied architect.  In fact, he was a priest and healer.  Fourteen-hundred years later, Imhotep would be deified as the patron saint of scribes and physicians. However, Imhotep created the roadblock for what was going to be the template for pyramids going forward – the Step Pyramid. Over the course of Djoser’s nearly 20-year reign, pyramid builders assembled six stepped layers of stone (as opposed to mud-brick, like most earlier tombs) that eventually reached a height of 204 feet (62 meters); it was the tallest building of its time. The Step Pyramid was surrounded by a complex of courtyards, temples, and shrines where Djoser could enjoy his afterlife.  After Djoser, however, his dynastic ancestors held such short reigns that no other pyramid in their lineage was complete.

Now, let’s skip ahead to what would become the most well-known of all pyramids.  No pyramids are more celebrated than the Great Pyramids of Giza, located on a plateau on the west bank of the Nile River, on the outskirts of modern-day Cairo. The largest (and only one standing) of the pyramids was built for Pharoah Khufu (2589-2566 B.C.) The sides of the pyramid’s base average 755.75 feet (230 meters), and its original height was 481.4 feet (147 meters), making it the largest pyramid in the world. It was initially surrounded by three smaller pyramids, where his queens were laid to rest, and a nearby gravesite for his mother. 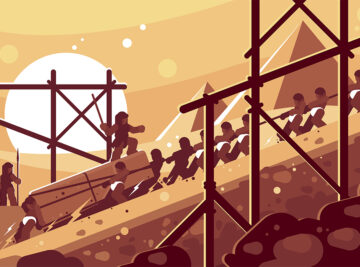 We talk about labor shortages a lot in today’s construction climate.  Many graduate from school, not necessarily thinking of the trades as a viable career.  However, back in the Egyptian days, it would have taken thousands to manually move the stone into place. For them, it was a matter of pride and duty to their Pharoah. There has been talk about the workers being slaves from neighboring lands, however, local gravesites (and we’ll touch on their safety plan in just a minute) show that the laborers were actually native Egyptian agricultural laborers who worked on the pyramids during the time of year when the Nile River flooded much of the land nearby.  Approximately 2.3 million blocks of stone (averaging about 2.5 tons each) had to be cut, transported, and assembled to build Khufu’s Great Pyramid. The ancient Greek historian Herodotus wrote that it took 20 years to build and required the labor of 100,000 men, but later archaeological evidence suggests that the workforce might actually have been around 20,000. Can you imagine managing that size workforce today!?  The timecards alone would make you want to dig your own grave.

What about safety? Today, we lean heavily on our OSHA standards and our safety plans.  We celebrate the lengthy periods of time when there are no accidents and, in fact, are judged on how safe we run our worksites. In historic Egypt, however, their safety plans were a little different – as were safety priorities.  They built graveyards and burial pits, close to the job site, in order to “safely” dispose of the bodies. These were VERY non-union conditions.

The ancient engineering feats at Giza were so impressive that even today scientists can’t be sure how the pyramids were built. It is fascinating to think about how the process of measuring, constructing, communicating, managing, and inventing came into play in such early days of construction and how – over 4,500 years later – these marvels of masonry still stand!

If the Pyramids were built today, what technology, materials, and resources would be used?
Comment below!