We all know the story.  We’ve heard it from the time we were little tykes to … well … I am sure you’ve heard it this year.  Here is OUR take on the classic Twas the Night Before Christmas. 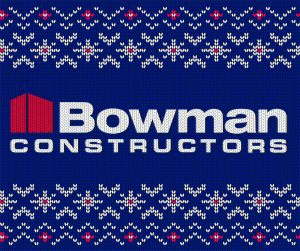 Twas the night before Christmas, when all through the site,
not a worker was working, well, because it was night.

The beams were all stacked by the Jobsite with care,
In hopes that the subs soon would be there

The supers were nestled all snug in their beds,
while visions of change orders danced in their heads.

And Rick in his vest, and Zack in his shirt
Were calming their brains from a days worth of work.

When out on the lawn there arose such a clatter,
Newell sprang from his bed to see what was the matter.

Away to the window Mike flew like a flash,
Tore open the shutters and threw up the sash.

The moon on the breast of the new-fallen snow,
Gave a luster of midday to dump trucks below,

When what to their keen/sharp eyes did appear,
But a souped-up red sleigh and eight mighty reindeer,

With a little old driver so lively and quick,
They knew in a moment he must be St. Nick.

More rapid than jackhammers his coursers they came,
And he whistled, and shouted, and called them by name:

“Now, Crow-bar! now, Wrench! now Nail-gun and Hammer!
On, Pick-axe! on, Bolster! on, Ladder and Rammer!

As leaves that before the wild hurricane fly,
When they meet with an obstacle, mount to the sky;

So up to the scaffold the coursers they flew
With the sleigh full of tools, and St. Nicholas too—

And then, in a twinkling, Dana heard on the roof
The prancing and pawing of each mighty hoof.

As he took out his earplugs and was turning around,
Over the trench St. Nicholas came with a bound.

He was dressed all in yellow, from his head to his foot,
And his clothes were all tarnished with ashes and soot;

A bundle of tools he had flung on his back,
And he looked like a peddler just opening his pack.

His eyes-how they twinkled! His lips wore a smirk!
His hands, they were strong from years of hard work.

He had big steel-toed boots to protect both his feet,
And the beard on his chin was as grey as concrete;

His hard hat he wore in a manner quite bold,
And across it were stickers from projects of old.

He had a broad face and a little round belly
That shook when he laughed, like a bowl full of jelly.

He was jolly and happy, and never complained,
And Dave thought to himself “He must be from Maine.”

A wink of his eye and a nod of his head
Soon gave them to know they had nothing to dread;

He spoke not a word, but went straight to his work,
He filled up a Connex; then turned with a jerk,

And putting a thumb up to show all was good,
He gave them the mightiest laugh that he could;

He sprang to his sleigh, to his team gave a shout,
And away they all flew – up, over, and out!

But I heard him exclaim, ere he drove from the site—
“Happy Christmas to all, and to all a good night!”