Today being President’s Day, we thought it only fitting to take a quick look at the construction of an important piece of American History – the Pentagon. 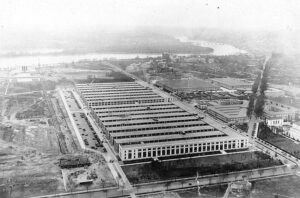 Officials agreed that the building should be no more than four stories tall and use a minimum amount of steel. The groundbreaking was held on the same day that contracts totaling $31,100,000 (equivalent to approximately $688 million today) were approved. A minimal amount of steel was used as it was in short supply during World War II. Instead, the Pentagon was built as a reinforced concrete structure, using 680,000 tons of sand dredged from the Potomac, and a lagoon was dug beneath the building’s river entrance.

“George, I’m speechless. This is the most fantastic operation I have ever witnessed. It’s unbelievable.”
– Gen. George C. Marshall British Field Marshal to Sir John Dill on viewing the construction of the Pentagon

Both the construction and the design work for the Pentagon happened at the same time. This meant that there were points where the construction work got ahead of design and different materials had to be used.

After the attack on Pearl Harbor, the pressure to speed up the construction of the building mounted. Somervell insisted that 1,000,000 sq ft be available for occupation by April of 1943.

A critical path challenge was the poor soil conditions and varying elevations across the site. Two retaining walls were built, and cast-in-place piles were created to deal with the soil conditions.

The final construction of the building was completed in approximately 16 months. Built one wing at a time, the building stands at 71 ft in height and 921 ft in length. 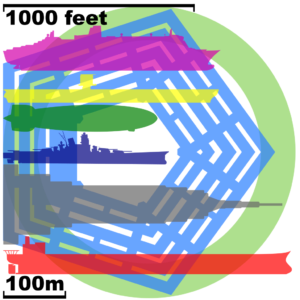